The Southern Tagalog region is one of the most coveted places to invest in real estate today. This region is booming (economy-wise) and there are more commercial and transportation developments set to take place in the coming years. Hence, Avida Land’s choice to build their latest project - Avida Settings Lipa – in this area is no coincidence. They wanted to target the developing areas to keep future homeowners of this house and lot community to be close to opportunities, as well as lifestyle experiences.

Lipa City is a first-class city within the province of Batangas in Southern Tagalog region. With less than half a million in population, it has consistently grown into one of the fastest rising cities in the region. Prior to that, Batangas has earned its reputation as the commercial, recreational, healthcare, and religious center of the province. The choice to build Avida Settings Lipa in this area is therefore a smart one, especially as many people are more likely going to move into the city.

One of the things that make Lipa City a desirable choice of location for Avida Settings Lipa is the access to public transport. There are many transportation options available such as jeepneys, buses, and well-developed national roads and highways, which means that the residents of the city can easily get around (whether within or outside of the city). The South Luzon Expressway (SLEX) and Southern Tagalog Arterial Road (STAR) are also available nearby so you can get easy access to and from the city.

The proximity of Lipa City to Metro Manila has also contributed to its economic growth. You can get to Metro Manila from Lipa for an hour and half drive. This strategic access is therefore a crucial element to the development trends of the city. For many years, a significant portion of Lipa was used for agricultural purposes. But while agriculture is still part of the city’s economy, many of it had been developed into residential subdivisions and industrial areas. There is also an influx of BPO (business process outsourcing) firms that provide additional employment opportunities to the people of Lipa.

The location of Avida Settings Lipa is therefore one of the major benefits that you can enjoy if you invest in this new development. You can have job opportunities, access to your basic needs, and some recreational opportunities too. And if you need to go to Metro Manila, it isn’t too far either. You can find a few key distinct landmarks near Lipa City that would cater to your needs. Some of these establishments include SM City Lipa, Robinsons Place Lipa, Lipa City District Hospital, Lipa City Science Integrated National High School, Lipa City South Central School, Sabang Bridge, Museo de Lipa, and The Farm at San Benito. As you can see, there are plenty of options available when it comes to nearby destinations. You won’t even feel the need to travel to Metro Manila to get the services you need as there are establishments available right within Lipa City. 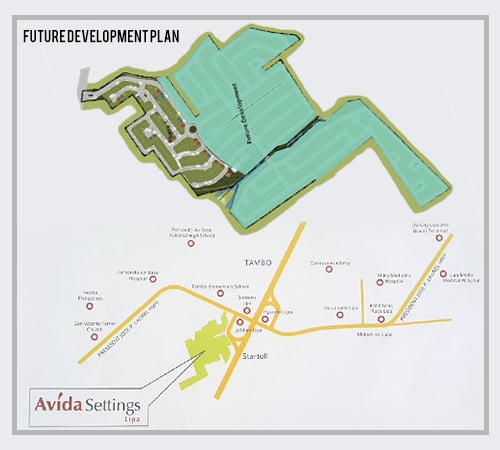